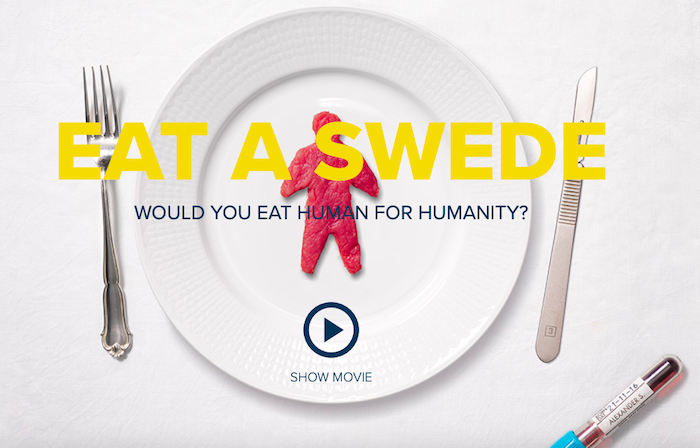 Would you eat human for humanity? That is the tagline of a new tongue-in-cheek campaign from the Swedish Food Federation, the industry organisation for food companies in Sweden.

An 18-minute-long ‘mockumentary’ forms a core part of the campaign, which was launched last week. The video introduces fictional scientist Erik Karlsson, who has come up with ground-breaking science that will change the food system as we know it.

Opening with the words “I’ve been eating human meat for quite some time now, and I’m not crazy”, Karlsson takes viewers on an adventure as he tries to secure investment for his business idea: lab-grown meat made from human cells, sold under the brand name Swede Meat.

“The global population is growing. And with that comes a requirement for more food. In 2050, the global population will reach 10 billion and the demand for food is expected to increase by 98%,” Karlsson claims in the video. “And it’s not just that we need more food, we need more protein. We have a lot of alternative proteins today – plant-based, fungi-based, and so on. But it’s not meat. So how can we create meat in another way? Well, technology has enabled us to grow meat from cells in a lab. I want to take this a step further.”

Various investment pitches and focus groups show Erik Karlsson making claims such as “If they say that you are what you eat, why not eat a Swede?” and “Eat a Swede, because we are good!” Naturally, the idea is met with scepticism – it’s “crazy” and “disgusting” – but Karlsson desperately tries to convince people they are not actually eating humans, that it’s just cells.

He even contacts well-known Swedish actor Alexander Skarsgård, hoping to use his cells to produce the meat. “That’s cannibalism though, isn’t it? You are so sick!” Skarsgård retorts.

While the idea of lab-grown meat from humans may be a hard pill to swallow for many people, most will agree that the food system we have today is not sustainable – and that changes are needed. This is exactly what The Swedish Food Federation wants to highlight with the campaign.

“We want to bring attention to a very urgent question: how can we sustainably produce high-quality food for 10 billion people? We’re not saying that we have all the answers, but we think we have some of them. The Swedish food industry has come a long way on the road to sustainable production, and we want to share information about how we are doing it. Our “secret” recipe isn’t secret at all; it’s equal parts innovation, technology, research, cooperation, and hard work. It can be copied, and we hope it will be,” the federation says on the campaign website.

The federation further clarifies that the idea of lab-grown human meat is entirely made up and is not something it supports: “It’s as absurd as it is unnecessary.”