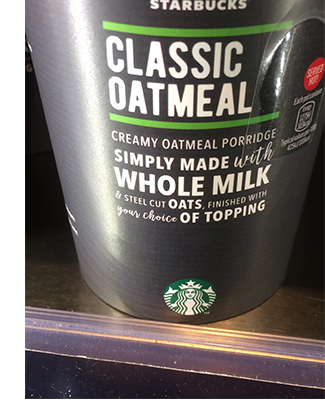 Even five years ago, the idea that a leading brand of ready-to-eat oatmeal would be made with whole milk (full fat milk) instead of low/no-fat milk would have been unimaginable. But Starbucks now gives the ‘Whole Milk’ content of its oatmeal top billing, as the picture shows, making it even more prominent than the word ‘oats’.

Why? Consumers are rapidly losing their fear of fat – and particularly dairy fat – as they learn from mainstream media and social media that more and more researchers and doctors have rejected the old fears about saturated fat and heart disease. And not only are there fewer – or no – health concerns about dairy fat, there’s emerging evidence it’s even good for you.

And hence in many countries:

Products made with whole milk also have the advantage of appealing to people’s wish for foods to be ‘simply made’ (as Starbucks oatmeal says on the front of the pack), unlike low-fat milk, which to many people looks too processed.

The advance of low-carb diets – often diets that are higher in fat – is also driving up people’s embrace of whole milk.

And if you think this is just a fad, think again – even the American Diabetes Association now recognises diets like keto as scientifically legitimate (see New Nutrition Business June 2019).

Natural dairy fat is gaining ground and there’s no turning back from here.