A few years back, probiotics were ‘owned’ by dairy. But the upsurge of the fermentation trend is giving people the confidence to get their probiotics 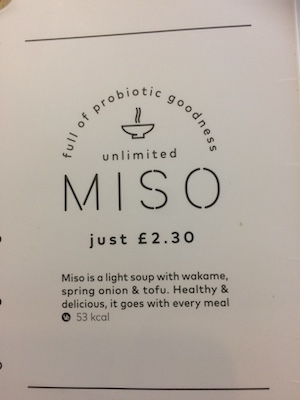 from a much wider variety of foods, from kombucha to kefir to kimchi. Now miso soup has joined the list.

With its 100 restaurants worldwide in locations such as Heathrow and Paris Charles de Gaulle airports and the Dubai Mall, the Yo Sushi chain, with its conveyor-belt-delivered plates of Japanese dishes, is distinctive, premium and appealing to health-conscious consumers.

So it’s no surprise to see it flagging up probiotics on its menu as a way of stimulating interest in miso soup.

The word ‘miso’ means ‘fermented beans’ in Japanese. In Japan, miso soup is traditionally believed to stimulate digestion and energy. It’s made from miso paste, which is produced by fermenting soybeans and grains.

What unites all the probiotic products that people buy – dairy, kombucha, kimchi, miso – is the idea that they are traditional fermented foods (even if they are far from the traditional form).

But people are not so forgiving if you try to attach a probiotic message to a product where there’s no logical or traditional connection. 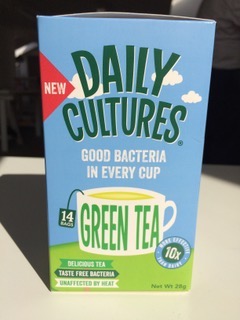 And that’s the main reason why green tea with probiotics (among others) has failed to catch on and survives as a niche concept. There’s no back-story of traditional ‘hot’ green tea with probiotics. It looks like a food technologist’s creation, not a reassuring ‘traditional’ product. And what health-conscious consumers want most is a product that seems to be ‘naturally functional’.

The same rules apply to many other ingredients – the ingredient, the product and the benefit all have to make sense together in the consumer’s mind. You break that rule at your peril.