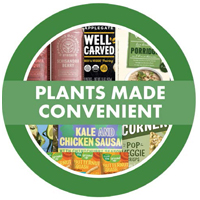 In the food and health industry, people throw around the phrase “plant-based” – but what does it mean to consumers? Many different things, according to a survey of UK consumers by the British Nutrition Foundation (BNF), a charity that provides evidence-based information, resources and training on food and nutrition.

The many interpretations of “plant-based” highlights the fact that food industry people and consumers are not always on the same page. Sara Stanner, BNF’s science director, said: “Most organisations, including BNF, define ‘plant-based diets’ as those mostly based on foods derived from plants, such as grains, vegetables, fruit, pulses and nuts, but that can also include a smaller proportion of animal derived foods such as meat, fish, eggs and milk…However, most people in our survey thought it meant being vegetarian or vegan, with only 10 percent equating plant-based with a ‘flexitarian’ approach, or a diet that provides a diversity of different protein sources,” she added.

Given that “plant-based” means vegan for most respondents, it’s little surprise that 61% of those surveyed say they are unlikely to follow a plant-based diet in the New Year – with 45–54-year-olds the least likely to do so (66%). People’s love of meat and dairy may be a factor contributing to reluctance around plant-based eating.

Stanner said: “Diets rich in plant foods have many health benefits including providing micronutrients, fibre, fruits and vegetables. However, animal foods such as meat, dairy, eggs and fish are important sources of a number of minerals and vitamins, including iron, zinc, calcium and vitamin B12, and so it’s important to balance the diet to make sure we’re getting everything we need.

“For many of us, the key may be finding ways of including more plant-based foods without drastic changes to the diet, for example, making stews with a mix of meat and beans instead of just meat, adding extra vegetables to meals and trying out a wider variety of plant foods or plant-based recipes,” she added.

Plant-based is a strong consumer trend that has propelled the growth of many products. But it’s not people’s desire to go vegan or vegetarian that’s driven success, as the BNF survey suggests. in the UK vegans are just 1.6% of the population, according to The Vegan Society, and in the US, IFIC data shows vegetarians account for only 5% of consumers and vegans 1%. It’s a difficult diet to stick to, with as many as 84% of vegetarians/vegans eventually abandoning their diet – often after as little as three months, according to the Humane Research Council.