Just as sugar has evolved as the dietary demon, plastic has become the bête noire of packaging. Consumers all over the world are calling for companies to start using less plastic, worried about the negative effects it has on wildlife and the environment.

So it’s surprising to see Starbucks, a company that makes a huge deal about environmental sustainability, launch two types of reusable cups made from – you guessed it – plastic.

Launched last month, the cups – which have colour-changing properties – became an instant success. The 24-ounce (709 ml) Confetti Cold Cup, which when filled with liquid becomes speckled with multi coloured dots, has become many consumers’ favourite. In fact, it is so popular that it sells on websites such as eBay for up to $21 – more than five times the price one would pay in a Starbucks outlet. 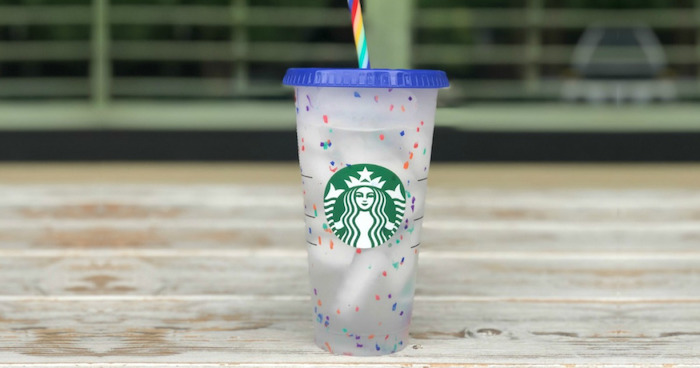 Starbucks is not new to reusable cups; since 1985, the company has rewarded consumers who bring in a reusable cup with a discount. There tends to be a certain hype around Starbucks’ own-branded reusable cups, with entire Instagram accounts dedicated to the products and some US consumers claiming to have collected cups since the 1990s.

But how well does this launch sit with a company that claims to be “leading in sustainability”? One could argue that by encouraging consumers to bring their own reusable cups, as opposed to buying a new single-use cup every time, the company does contribute to environmental sustainability. At least this is how Starbucks itself sees it: “An important component of our overall waste reduction strategy is the use of reusable cups,” says the website.

But surely in 2020 a global multi-billion-dollar company should be able to do better than resorting to plastic? There are other (albeit not coffeeshop-branded) reusable coffee cups on the market, made from anything from bamboo to rice husk, glass, corn starch or even recycled paper cups. While these options will certainly be more expensive, and difficult to decorate with colour-changing properties and other gimmicks, they could be one way for a sustainability-focused company to reduce its carbon footprint.